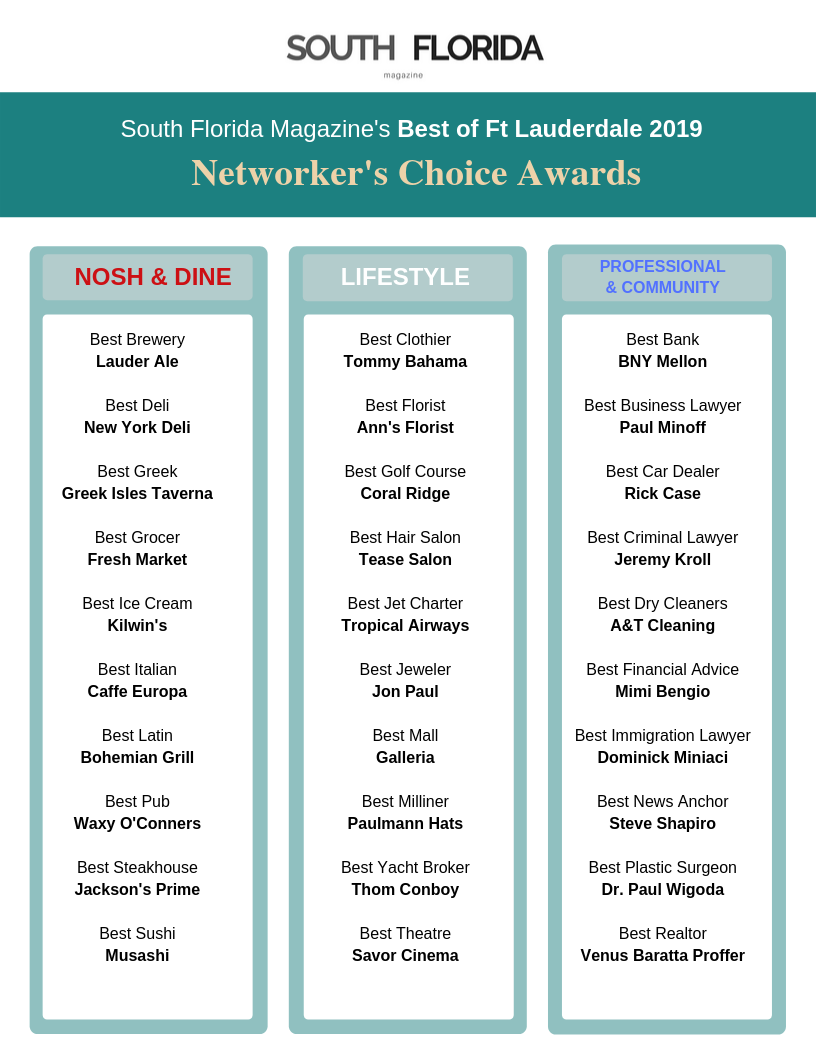 Douglas Elliman Florida marked a banner year in 2017 with $3.6 Billion in closed transactions, up 34% from 2017. Nationwide, Douglas Elliman's total sales volume was $26.1 billion, up six percent.

"Douglas Elliman continues to flourish in South Florida because of the incredible success of our highly skilled and talented agents," said Howard M. Lorber, chairman of Douglas Elliman Realty, LLC. "We expect our strong presence and brand to continue to grow in the region in 2018."

Leading the Top 5 Teams for Florida was The Carroll Group, based out of Miami and Miami Beach. They were followed by The Alexander Team (#2), Carmenate + Duchon Residential (#3), the Goihman Group (#4) and the Bill and Bryan Team (5).

The Top 5 Agents for Florida were led by Maria Mendelsohn, based out of Wellington. She was followed by Steve Solomon (#2), Raul Santidrian (#3), Senada Adzem (#4), and Pablo Alfaro (#5).

"We are incredibly proud of our talented team of agents and their dedication to Douglas Elliman's success," said Jay Phillip Parker, CEO of Douglas Elliman Florida. "We have experienced extraordinary growth and expansion in the past year, and we look forward to the exciting opportunities that lie ahead as we continue on this path to becoming the most dominant real estate firm and resource for sellers and buyers of luxury properties throughout Florida."

Douglas Elliman Florida continued its expansion and growth this year throughout South Florida adding a 20th office and reached a total of 1,000 agents, more than any other firm in South Florida. New offices opened in Brickell and Mizner Country Club and the firm kept its ranking as number one in Miami Beach. The top sales included a spec home in Miami Beach Elliman handled both sides of the sale for at $22.6 million, a Venetian Islands home for $22 million, a waterfront home in Manalapan for $21.6 million and a resale unit at Faena House for $20.6 million.

"I am incredibly proud of Jay Parker and our entire team in Florida," said Scott Durkin, Douglas Elliman's President and Chief Operating Officer. "This past year marked a new level of success and we look forward to continuing to provide all of our agents with the best in class technology, marketing and public relations to help them reach even greater heights in 2018."

Winning the award for #1 Top Agent in Brickell/Coconut Grove was Raul Santidrian. He was followed by Rose Harris (#2), Hilda Jacobson (#3), Barbara Estela (#4) and Tomi Rose (#5).