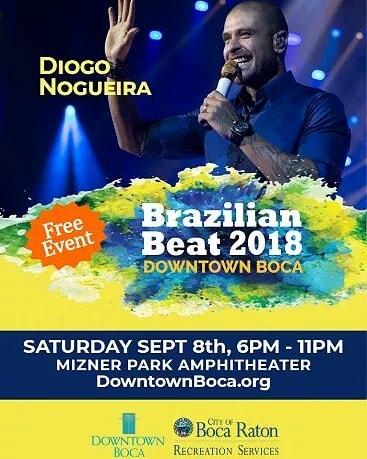 Headlining Brazilian Beat will be Diogo Nogueira, one of the biggest names in Brazilian music today.  Son of the legendary João Nogueira, he sings samba, the pulsating, wildly popular and joyous music synonymous with Brazilian culture. A multifaceted artist, Nogueira is a singer, composer, instrumentalist and also a TV and radio personality. He was nominated for the Latin Grammy for all of his seven albums, and won the category “Best Samba Album” on two occasions. His discography has earned six Gold CDs, and three Gold, two Platinum and one Double Platinum DVD. Completing a decade long career with over 10 million in sales, he has just released his first album of all original compositions, “Munduê”(Universal Music). The album has been widely embraced by the public, fellow artists and critics alike, confirming his place as a major star in Brazilian music today.

This FREE event brings together the art of music and dance in one mesmerizing evening. Get your groove on and be a part of this dazzling official celebration of Brazilian Independence. Live music, street dancing, including costumed dancers in a Rio-style parade by the SambaLa Samba School, a Capoeira circle, samba drummers a Zumba showcase and savory Brazilian cuisine and cocktails will make for a most memorable festival.

Thank you to our Brazilian Beat partners:

Downtown Boca and the City of Boca Raton Recreation Services. For more information call (561) 393-7807, or visit www.DowntownBoca.org or www.MyBoca.us.